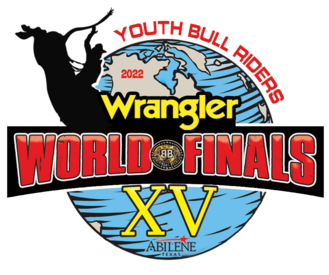 Youth Bull Riders World Finals reserves the right to enforce the rules of this event. Unruly actions during the finals will not be tolerated by any contestant, parent or any person attending the event or staying at a host hotel. Due to Covid-19, preventative measures will be in effect at all times including face masks requirement upon entry.

1. The four judges will score each ride 1-25 for the rider & 1-25 for the stock, then the two front judges scores will be added up and this will constitute the score on a qualified ride for the rider, the score will also serve as the riders points see example below. Judges decisions are final. Parents or other persons approaching, engaging, petitioning or protesting in any way which is distracting to the judges, arena directors, or YBR officials during the event for any reason will be subject to having their child disqualified for the finals.
Example: 1st ride 68 pts, 2nd ride 70 pts going into the short go the rider would have 138 pts.

3. In the event of a tie, the back judge’s scores will be used to break the tie in the event in question.

4. All riders will compete one handed, this includes Muttons and Calves.

5. It is the responsibility of the contestant to make sure he or she is competing on the correct head of stock. Competing on the incorrect stock will result in disqualification on that ride.

6. All stock will be drawn before the bull riding starts. The draw is done by the YBR Secretary on the computer and monitored by the Chairman, Co-Chairman or a Director of the YBRWF. Contestants will not draw the same head of stock in any performance that he/she has drawn previously, this will not include re-rides, except in the short go, and contestants could draw the same animal.

7. No unauthorized personnel will be allowed into the secretary area PERIOD! When the sheets have been tallied for that event, the results will be posted. This will help to eliminate the possibility of errors, as we want each rider to get the most accurate count.

8. Contestant will have 30 seconds to call for their animal once the gate men get to them. The back judge will have a stop watch and keep times. It will be at the back judge’s discretion if the contestant is being given a fair shot by the animal. Riders need to have their ropes on and be ready to go when the rider in front of them goes.

9. The use of abusive, profane language, improper gestures, theft of any kind or fighting by any contestant, parent or any person attending the event or staying at a host hotel acting in an unruly manner during the YBR World Finals of which is then reported by the hotel manager back to the YBR office, will be subject to disqualification of the finals. THIS WILL NOT BE TOLERATED!!!!

10. Western dress code will be in effect at all times during the World Finals and any events that you are asked to participate in. This is for anyone and everyone entering the “Limits of the event”. This includes all Dads, Moms, and or Helpers.

11. Alcoholic Beverages will not be allowed on the premises of the rodeo grounds or in the coliseum. Any Contestant or Contestants parents found drinking any type of alcoholic beverage prior to their ride or in the arena or the above will be subject to being disqualified or have said child disqualified and entry revoked immediately with no refund.

13. The Board of Directors reserves the right to not accept entries and to amend or revise any rule at any time during the event or year.

14. Announced times and scores are unofficial.

A.  Protest must be a rule violation not a judge’s call. All Judges calls or decisions are final.

B.  The Arena Director must be notified before the next rider rides their animal.

C.  The protest must then be put into writing and submitted to the event secretary.

D.  The protest committee that is made up of the judge’s will meet to determine the outcome of the protest before the next rider goes.

F.  If any of the following requirements are not met, the protest will not be allowed.

17. Any falsification of information or documentation from contestant will result in immediate disqualification. Any organization doing the same will have all contestants disqualified.

​         A. If the animal fails to perform then the judge can offer a re-ride.
B. Muttons will not be flanked

A. With a loose rope with or without handhold.
B. Touching animal, equipment or self with free hand will cause disqualification. One (1) arm must be free at all times.
C. Contestants who are knocked off or fouled at chute, animal falls, stops, does not perform or is interfered with in any way by the contract help will be entitled to a re-ride at the discretion of Judges and/or Arena Director.

1. Flanked animal will be rode for eight (8) seconds.

2. Riding is to be done with one (1) hand and loose rope, with or without handhold.

A. No knots or hitches to prevent rope from falling off animal when contestant leaves him.
B. Rope must have bell. Bell must be of rectangular shape with a ringer, NO crosses!
3. Contestants who are knocked off or fouled at chute, animal falls, stops or is interfered with in any way by the contract help will be entitled to a re-ride at the discretion of Judges and/or Arena Director.
4. Rider may have the option of re-ride, or of accepting a marking, if flank comes off the animal, providing the contestant has completed a qualified ride. The re-ride may be given on the same animal, if the Stock Contractor is willing, or a re-ride animal, if requested by Contestant.
5. It will be the responsibility of the contestant to ask for a re-ride immediately after dismounting and before next contestant rides.
6. The judges shall offer the option of re-rides if performance of animal is not suitable.
A. In 11 & under through 19 & under, the contestant in each age group will declare if fouled at the gate.
B. No more than 2 re-rides can be taken in a row. If a 3rd re-ride is awarded, it will be after the next event is done, unless it is during the last event.
7. If contestant makes a qualified ride with any part of rope in his riding hand, he is to receive a marking.
8. The contestant will have the right to call Judges to pass on whether or not animal is properly flanked to buck to best of is ability.
9. The contestant is not to use sharp spurs.
10. Contestants may be disqualified for any of the following offenses:
A. Using abusive, profane language or improper gestures.
B. By fighting or arguing with a judge, this also includes the parent.
C. Touching animal, equipment or person with free hand. One (1) arm must be free at all times.
D. Using sharp spurs or placing spurs or chaps under the rope when rope is being tightened.
E. Not having a bell on bull rope.
F. Hooking a knot before coming out of the chute.
G. Judges or Arena Director may disqualify or fine contestant who has been advised he is next to go, if he is not above his animal with his glove on when previous animal leaves the arena. Each rider will have a 30 sec. time frame to get out on their draw.
H. Each contestant will have no more than two people pulling his rope, nor will the rope be pulled tight before the ride.
11. No one is allowed to run along or assist in any way during the ride if this occurs the rider may be subject to disqualification and or find. Once the ride is over and if the contestant gets into trouble and the bullfighters need assistance a parent or anyone close may assist the contestant at such time. We would like for the bullfighter to have the opportunity to assist the rider, but in Some cases they need help to keep the contestant from harm.
12. Contestant must wear a protective vest to ride. Helmets with a face mask are mandatory.
​13. Stock for the 13 & under Senior Riding may be young bulls, heifers or steers

22. General Rules for all Rough Stock
1. No bull, calf or steer may be put in the draw until his horns have been tipped to the appropriate size.
​         A. Head fighting animals having horns may be taken out of draw.
2. If livestock lies down in chute more than three times (3), and will not get up;
A. It’s up to the rider to request another one or he may keep the same one.
3. After the animal leaves chute, no Hot Shot may be used in the arena.
4. All stock will be marked clearly and Identifiable with the proper stock contractor ID tags at all YBR Bull Riding Event’s especially the WORLD FINALS.
5. No stock contractor that brings stock and has a rider in said event can flank the stock during the event and no parent or helper can re flank their riders animal.

23. Stock Weight
Stock weight will be what is available at the time of the event

24. Livestock Inspection Committee
​The YBR will have the authority to inspect all livestock prior to the go-round draws and take out any animal that is not physically suitable.

25. There will be a meeting prior to the event that requires your presence but is not mandatory. There will also be a meeting prior to the Short Go and riders presence is required and mandatory. If rider is not present when riders name is called for roll, then the rider will be disqualified from the short go and the next rider eligible will be moved up.​